Recent political and social events in various African countries clearly show that social media are used very actively in many countries and are used to serve the interests of citizens. Most people remember the "Arab Spring 2012", or the reports about the missing schoolgirls in Nigeria. Since then, some studies have emerged about the use of social media in South Africa.

One continent and 54 countries! According to the McKinsey study, currently, there are 720 million Africans of about 1 trillion who have a mobile phone, making it the world's second-largest mobile phone market after Asia. That means 167 million already use the Internet, and 52 million Africans are on Facebook. The trend is increasing daily.

The most significant impact of the Internet in Africa will be on six major areas. These include

Facebook is the most visited website in Africa. In the year 2012, there were about 44.9 million users from the African continent. More recent figures already speak of 52 million. As the study below shows, a staggering 20 % are from South Africa alone. As usage has increased significantly, Facebook has also introduced African language versions such as Swahili. At the time of writing, there are already ten different African languages on Facebook. Most logins are via mobile devices. It is estimated that 80 % of the logins are from Nigeria and South Africa.

Most Facebook users come from the following African countries: Egypt, South Africa, Nigeria, Morocco, Algeria, and Tunisia. The latter is the country with the highest "Facebook penetration" in terms of population, estimated at 29 %.

Cities in South Africa and Egypt are the most active Twitter centers on the African continent.

The most commonly used languages on Twitter are English, French, and Arabic. These cover about 75 % of all tweets. However, some African languages are catching up rapidly. These include Zulu, Swahili, Afrikaans, and Xhosa. However, there were rumors that Twitter would not recognize Swahili as a language.

Particularly popular topics on Twitter is football and current affairs. The most mentioned football team is Johannesburg's Orlando Pirates, with all the relevant hashtags.

While in 2012, Twitter in South Africa was mostly used for everyday conversations. In the meantime, it is explicitly used as the number 1 Social Media Marketing Channel in South Africa. For companies or celebrities, it is necessary to know the Twitter world to keep up or not to lose their share of the market. Hashtags such as Samsung, Adidas are used particularly often.

In Africa, the use of SMS is still prevalent, but social media services such as WhatsApp are catching up. Currently, about 10.6 million Africans use this service.

The statistic below shows a ranking of the most popular social networks and messengers in South Africa, according to the share of users in the third quarter of 2019. At the time of the survey, WhatsApp users accounted for 89 % of Internet users in South Africa. 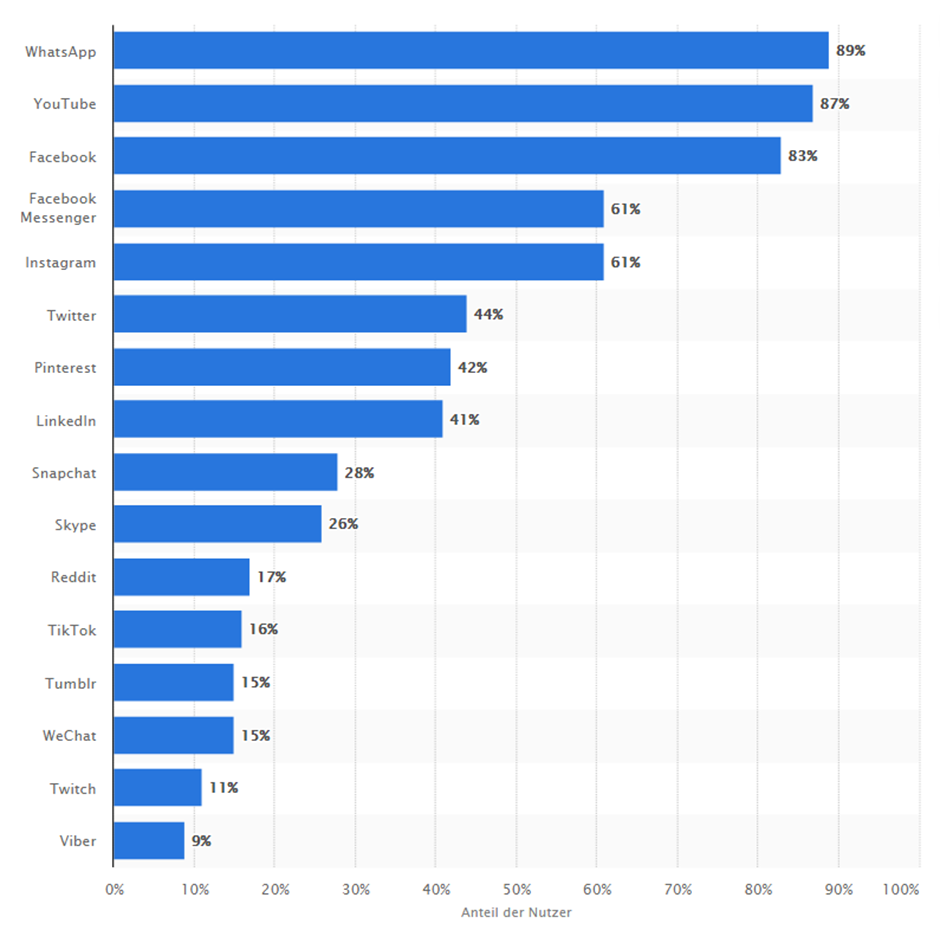 Governments have understood the link between Internet access and economic recovery and are working on plans to expand high-speed Internet connections. Web-based companies have entered the South African market, such as e-commerce sites like Jumia, HelloFood, and Easytaxi. There are also mobile health apps like MedAfrica.

Even though Social Media Marketing in South Africa has caught up enormously, traditional media have the most substantial influence on the population, especially in the more rural areas where are fewer mobile phones. Radios are still the most effective and cheapest way to reach large sections of the community of rural regions.

The proportion of mobile Internet use is particularly high in Africa. The continent ranks 2nd after Asia with approx. 14.85 %.

A typical African network is Mxit - a social network and instant messaging service designed to meet the needs of Africans. It has about 7.4 million monthly users, of which 6.5 million are from South Africa.

An important difference to other regions is that social media in Africa is a means of inexpensive communication rather than being used for entertainment or media use. Low-cost tariffs and free services are, therefore, particularly popular. To even equip more people with smartphones, the country needs devices that are available for less than 70 US $. Otherwise, it will not be possible to bring the technology and possibilities closer to a broader mass.

But social media can do even more: it is capable of influencing millions of people. The "Arab Spring" is just one example that has demonstrated the power of social media. What power social media can have was also shown by the fact that in the past, the one or other social media platform was shut down. This usually occurs when there is political upheaval. While Social Media Marketing in South Africa brings people more freedom to connect and trade, autocrat governments might see this uprising social media trend as a threat of their way to govern.

Statistics point out that during the lockdown, the world went into a social media "craze." While social media usage went up worldwide, it was even more so in South Africa. According to a Hootsuite study, an international social media management platform, the use of social media in the months of March and April 2020, South Africa has shown the most significant increase. While the global expansion was by about 47 %, South Africa topped this figure by 3 %. This rise was only surpassed by the Philippines 64 %; Brazil 58 %; and India with a 55 % rise. It might be worth pointing out that all four countries, which show a high surge in social media use, are also developing countries. Not surprisingly, the most significant increase was among those aged 16-24. Their usage went up 58 %. This figure includes a rise of 10 % of the female population. However, it is expected that this increased usage of social media in South Africa will not continue after the lockdown is over.